Let me introduce myself and my riding partner/best friend to all you internet strangers.

The Hack (me):
I received the nickname “The Hack” many moons ago after probably fixing something with wire nuts and liquid electrical tape (which still resides deep in my Wee). Or because of the plethora of my motorcycles labeled “shitbikes” over the years. Tongs:
My best friend of nearly 12 years. We’ve been riding together more or less our entire friendship. He is nicknamed “Tongs” because of his extremely long phalanges, they are like salad tongs. Tongs likes to go fast, take changes and eat meats + sweet sweet ice cream. 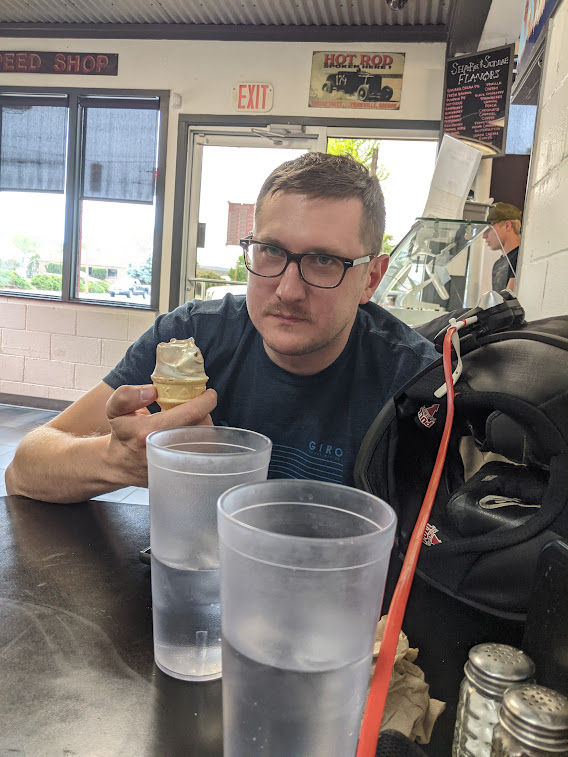 We both ride the worlds greatest motorcycle, a first generation Suzuki V-Strom 650.
A Wee, a Wee-strom.
They’re all hopped up on Mt. Dew.
Fantastic suspension bits, upgraded brakes, cam swapped, fuel injection tuned.
They both have 100k+ miles on the chassis… Maybe a bit rickety? 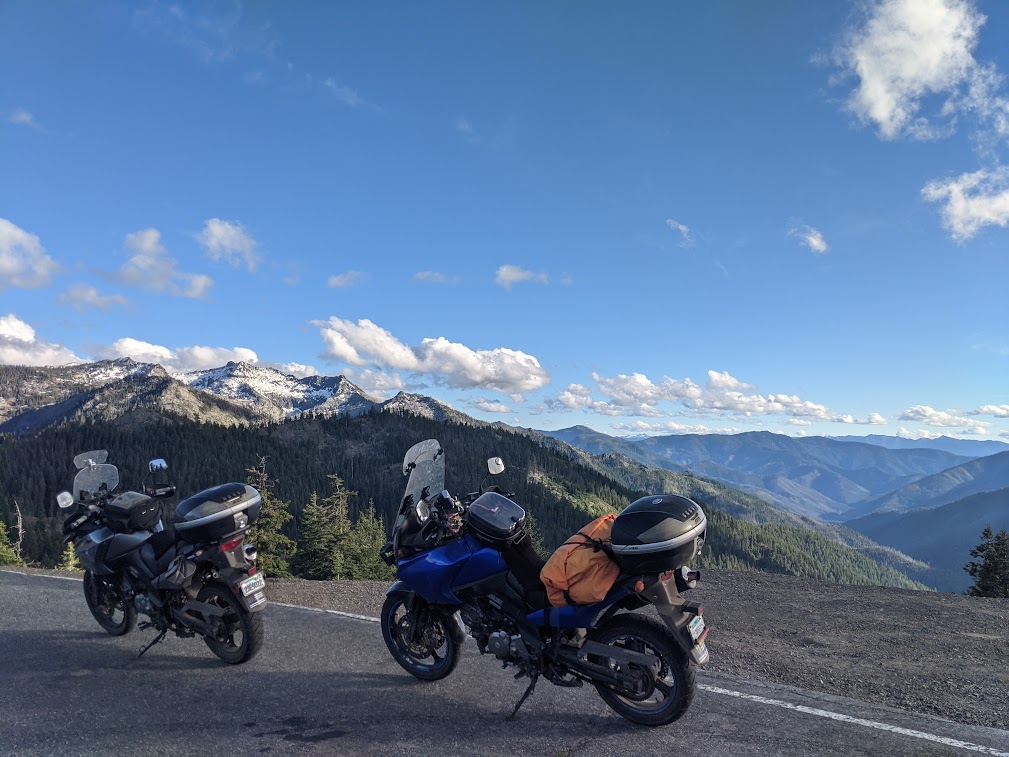 Before leaving this year, we had planned on mixing it up a bit and heading South, towards Arizona. But days prior to kickstand up date, we looked at the weather and realized going South would be a HORRIBLE idea, as it was 105+ degrees for the entire planned trip…

Tongs and I quickly changed gears and directions, pointed our Wee’s northbound. But if you have read any of my previous ride reports, we often head North towards Oregon and the coast… So instead, we planned to head into Northeast California (Modoc County). Neither of us had ever really explored that area of our great Commifornia before. Should be interesting? And not 105 degrees…

Tongs had purchased a set of Michilen Anakee 3 tires on closeout some months ago, so I had to purchase the same tires (not on closeout) because our bikes have to be equally equipped so no rider had an excuse when they suck and can’t go fast. The two of us did our trip prep as usual:

I pack a massive toolkit that would allow us to rip apart our bikes all the way down to the frames (if needed).
Tongs brings lots of t-shirts and baby wipes.

After a few days of prep’n, we were ready to go!!

Well, I was ready to go… Tongs had been battling a horrible poison oak itch (which was all over his body) for the last week. He was a pussie mess. The poor guy was so wet and goopie that he was afraid that his wounds were going to stick to the inside of his ‘stich! He was so scared of this goopie mess that he nearly pushed the trip back by a few days!… I awoke to the sound of a light drizzle.

Here in the S.F. Bay Area, there had not been any rain in many many months, and of course… the day we are supposed to leave on a trip, the sky opens and toxic rain dumps from the heavens. It rained a bit heavier down in the South Bay where Tongs lives… Really moist.

We both tried to hold out and not ride in the rain. We’re also not really early risers, so this worked out well. Tongs was NOT prepared to leave early in the morning and packed most of his trip wears the morning of the trip, as usual.

Tongs and I met Bowlcut for “breakfast” in Walnut Creek at a local eatery. Bowlcut was planning on leaving for a month ride to Alaska a few days into our trip, so we had to see the little feller before his adventure.

Breakfast meats were consumed, as per “Hack and Tongs trip policy and procedures.” 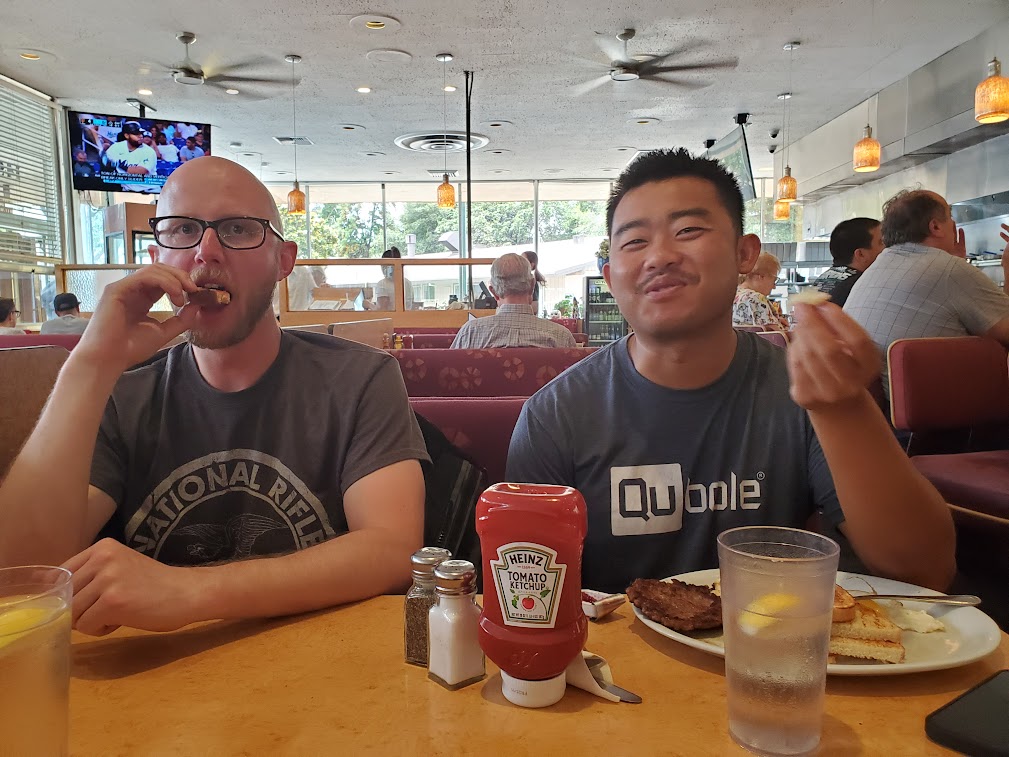 We didn’t leave breakfast meats until nearly 1:30 P.M. Yikes!
Even for us non-morning folk, this was pushing it. 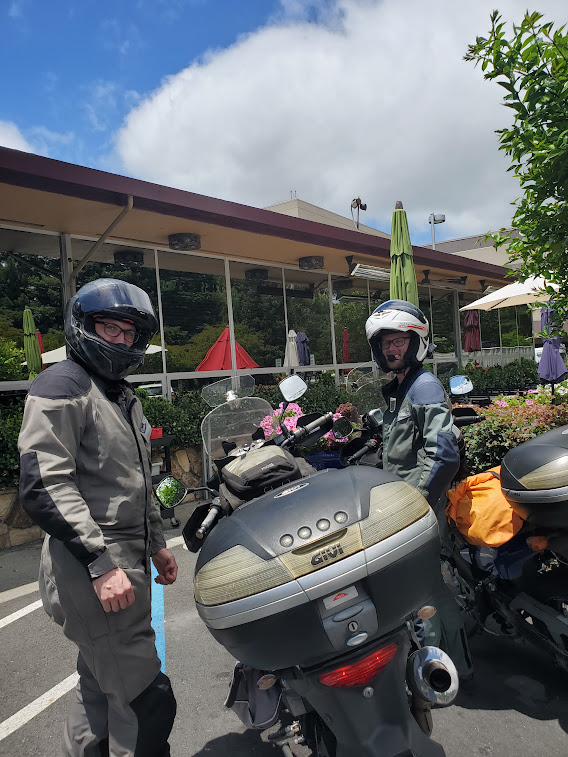 I had planned for us to ride through Berryessa/Knoxville before crossing the central valley. So away we went! 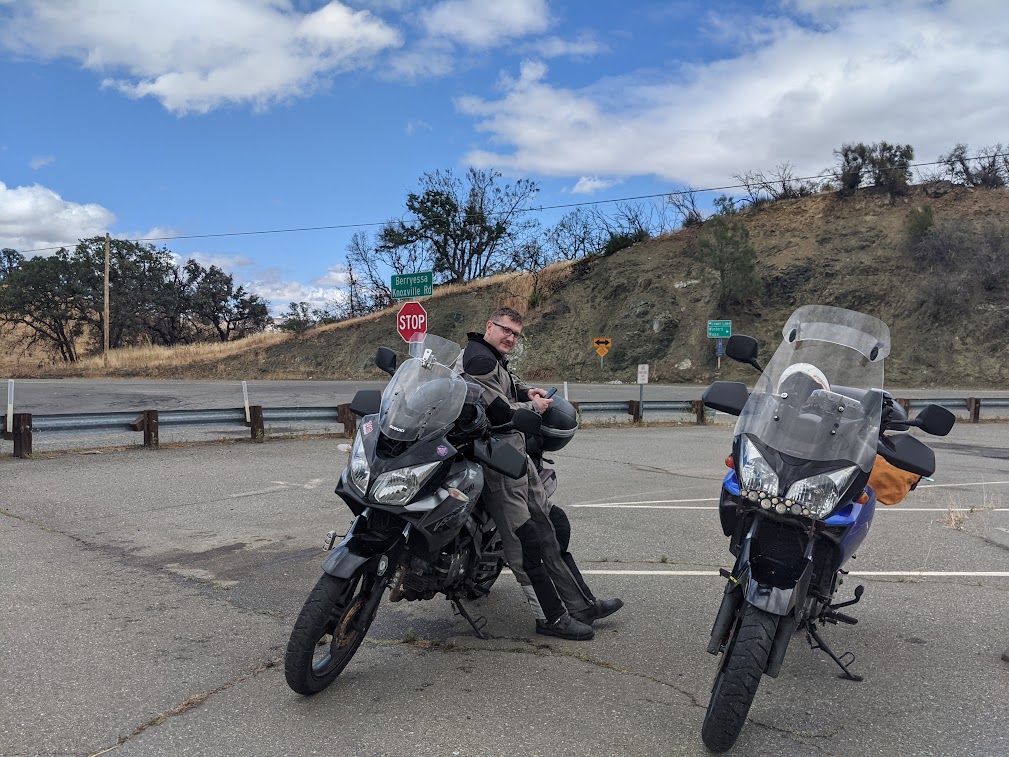 Knoxville never disappoints, it was even more tore-up than past years. But in spots, the county had “improved” the road and turned the large culverts into buried pipes. Kinda sad about that, as you can no longer rocketship through the culverts at 60mph and fly out the other end. But there were more “surprise” dirt sections that either of us remembered in the past. We giggled and went fast, as usual. 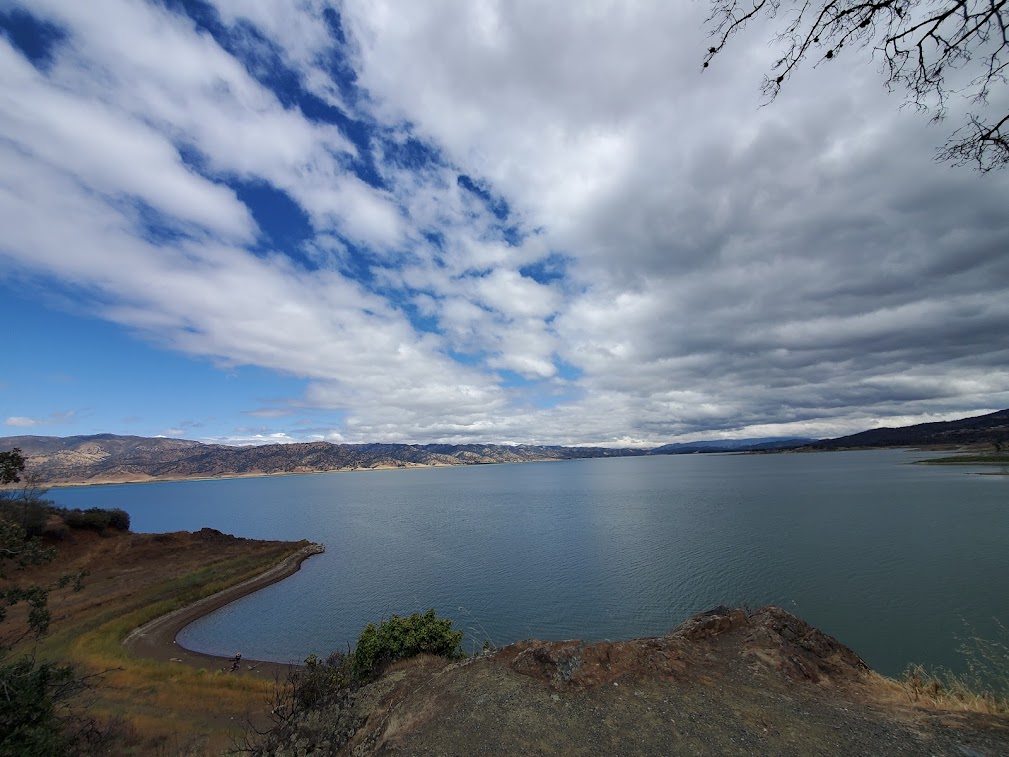 After a hoot’n and hollar’n good time on Knoxville, we stopped for some petrol and snacks out in the valley.
One of my favorite things to do at gas stops is to purchase questionable hot snacks. I believe in pushing my personal limits and enhancing my immune system. On that day, I purchased very moist looking “Honey Butter Biscuits.”
They were not that moist, but they were honey-e and butter-e.
Tong’s really doesn’t like to play these games with me, but he ate that biscuit, and liked it. That’s right you lil cuck! 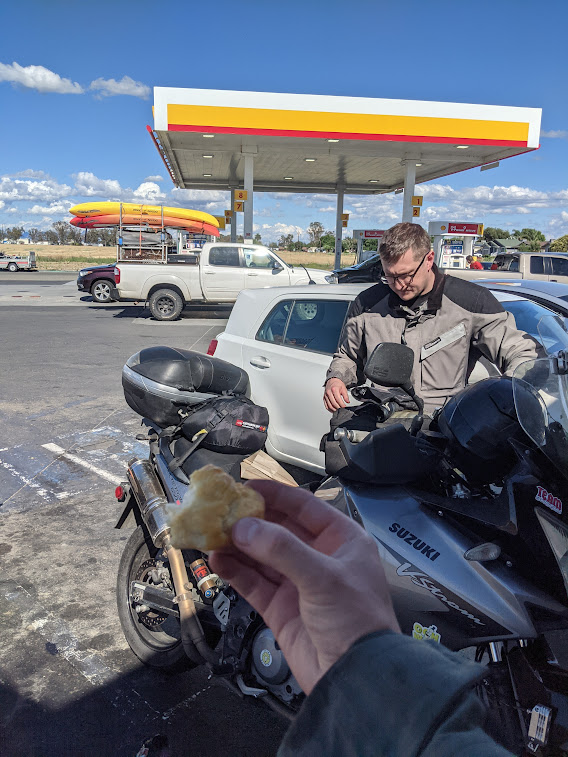 After eating his biscuit, Tongs lubed up his poison oak with some herbal oils.
Please note the fact that he wrapped up his gooie mess. Poor little feller! A few minutes after gas’n up, we got stuck at a train crossing. We were there for a pretty good amount of time… I love sitting there watching trains go by, feeling the earth shake under our Wee’s. It’s pretty interesting.
“That’s a lot of wood!!” – Tongs. 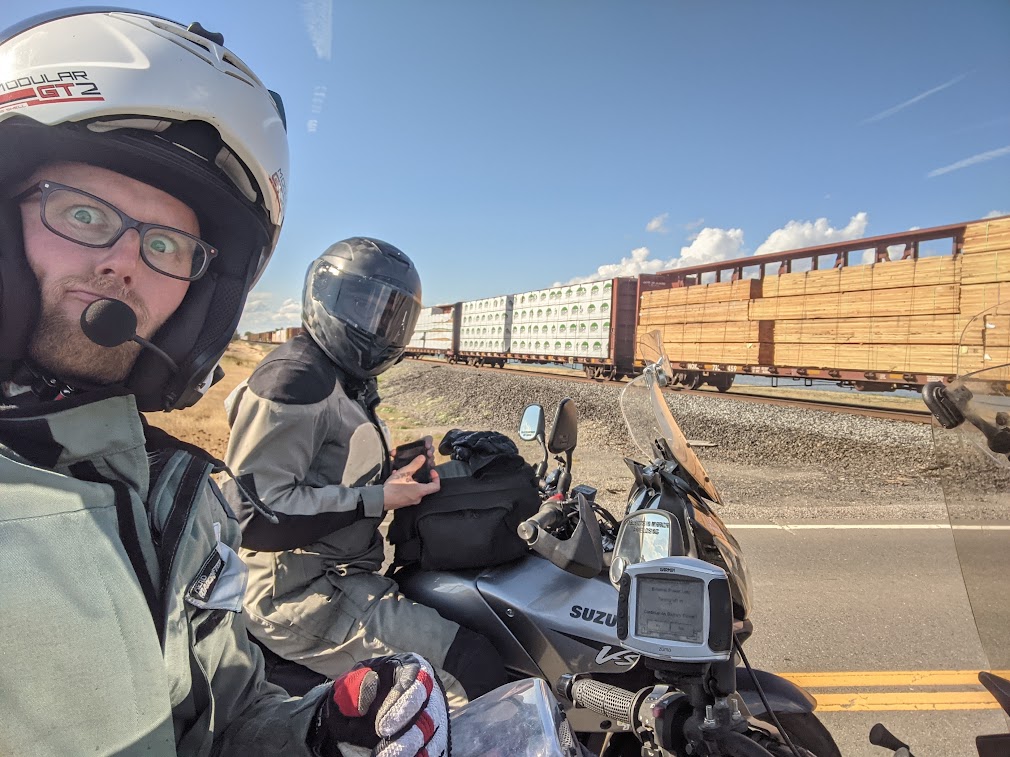 After seeing a lot of wood, Tongs and I blasted up through Oroville and onto Bucks Lake Rd.
Lawrd. So good.
Fresh pavement, good black squiggles, no traffic. 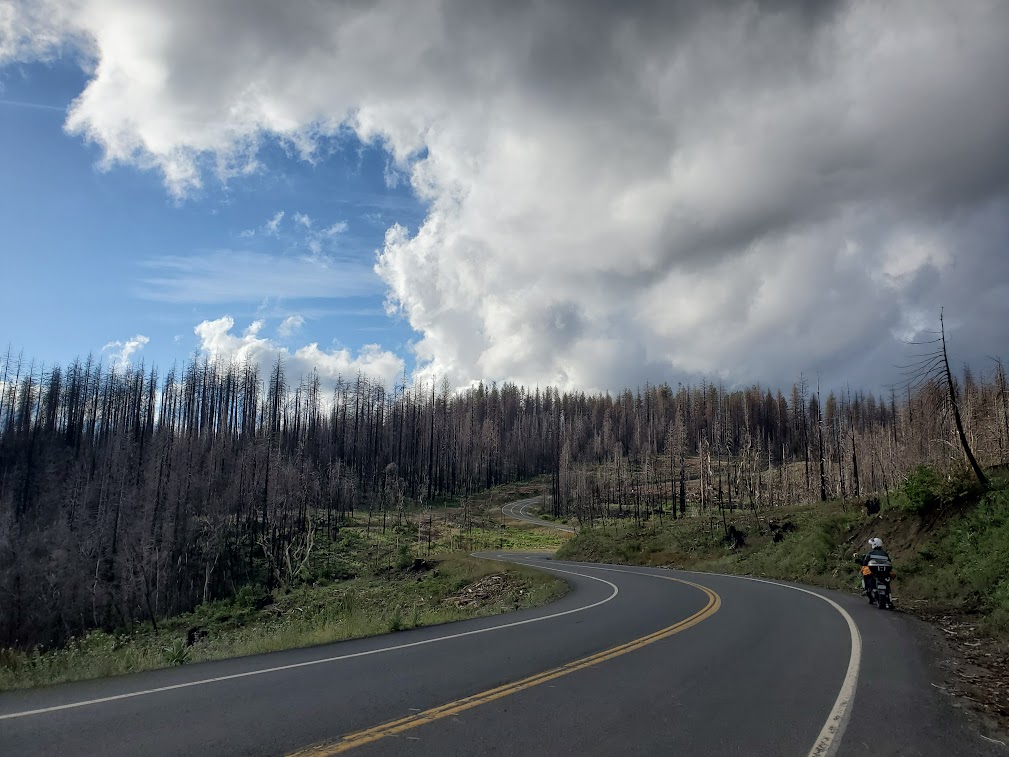 Around this time, Tongs muttered, “Ohhhh ohh, these Anakee 3’s! The premium riding – tire experience!”
He ain’t wrong… These Anakee 3 tires are the finest tires either of us have EVER run on our little Wee’s… And we’ve tried nearly every tire under the sun at this point. A quick stop in Quincy at The Polka Dot for cheese burgers.

When I began this trip, I had recently started dating a beautiful young woman.
I sent her this picture of Tongs and I sitting in the little picnic area.
She replied “You and Tongs share a lot of romantic meals.

Fuck yeah we do! Our bromance knows no bounds. 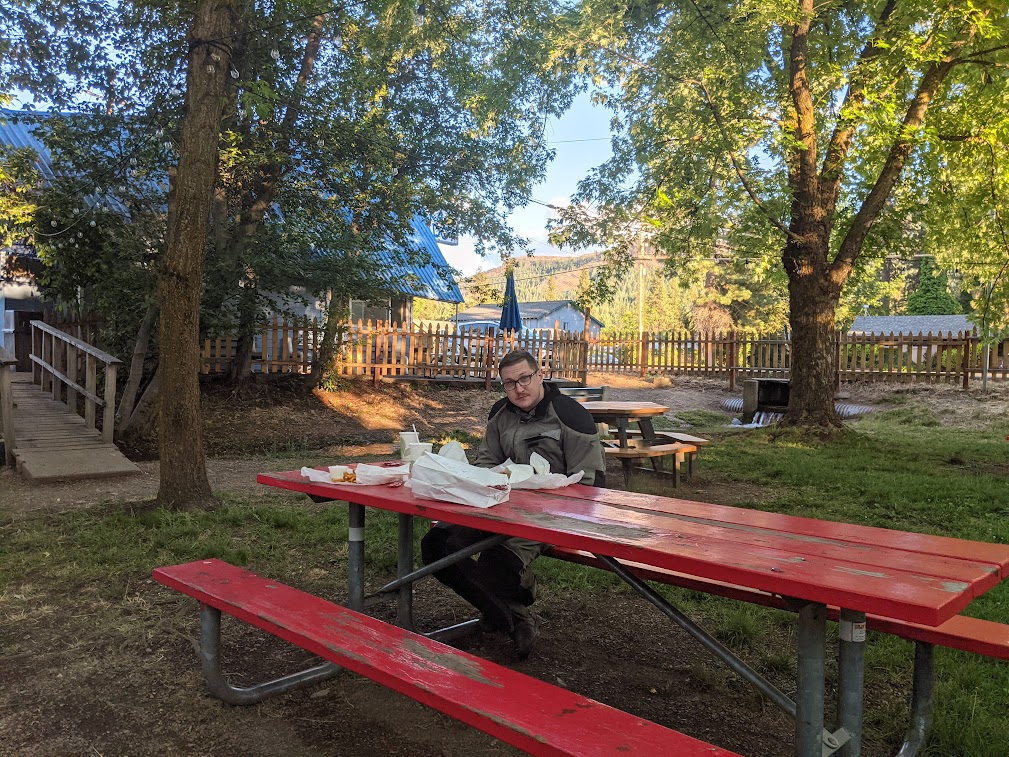 We were really hungry, as all we had eaten all day was breakfast meats + one honey butter biscuit. At the time, a “double” cheese burger with bacon sounded great…

When I picked up my meal at the window, I felt the heft of my double burger…
“We’ve made a horrible decision!” – The Hack
It’s hard to grasp how big that burger was, but I could not manipulate my mouth to engage the burger fully.
It was large, and saucy. 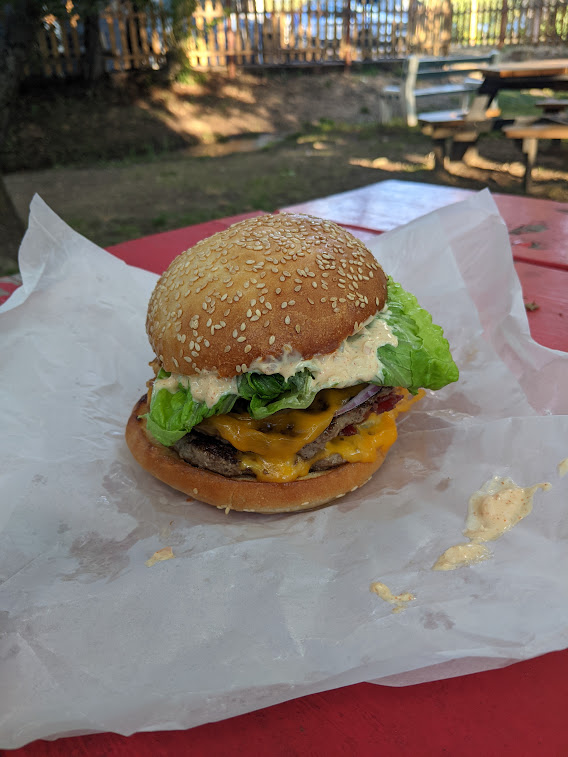 With the fries and double meats, it was easily ¾lb of nutrients all bagged up. But my familial German/Lutheran upbringing/guilt kicked it.
“No waste!”

Both Tongs and I consumed all the food.
We ate until we both could no longer talk.
I had to reach down and loosen my back brace two times during dinner… That’s how I knew bad things were about to happen.

CA Gas prices can eat a… While blasting down Hwy-70 towards our campsite for the night, Tongs hollar’d, “I’m getting cold! I gotta pull over and put on my jacket!”

Well, we were hauling pretty good when Tongs decided to make a break for the shoulder to find warmth from inside his topcase.
Tongs was hard on the front brakes when I witnessed a solid front tire lockup at speed. Then I saw a hard handlebar dip and whole bike tuck, only for a split second. Then the bike snapped upright.

Then a screech “AHHHHHH! OOOOOHHH WEEEEE!!”
The shoulder was completely covered in a thicc layer of fine gravel. That was a pucker for sure.
Tongs got off his bike and made some weird shaking movements for a few seconds while screeching.
No one died, but it sure was close to a blap. Good thing our Wee’s have Scotts Dampers! That and Tongs is an expert rider. We made it to camp (which was a nice NF campground, and completely empty) and prepared for slumber.

Still so full of meats.