Tongs and I woke up bitterly cold and dry as could be, 8am’ish.

We we decided to share a nylon homestead (because we’re lazy). That and I was afraid of it getting too cold to sleep comfortably, so I forced Tongs to share a tent that evening. Good thing I demanded shared tent warmth, because it was pretty frigid during the night! I slept with a beanie on and multiple layers in my summer bag with a thermo-liner.

I will never learn… Ugh.
Early June rides should require a cold weather bag, not my summer sleeping bag! Tongs got right to work lathering up his poison oak ouchies. But as you can see, he’s thrifty (that Walgreens branded ointment). Once he was properly lubricated, it was time for a whores-bath for both of us. It’s vital that you eat all your meats and clean your feets (and your pits)! We’re usually pretty quick to pack up in the morning, but it was a bit chilly on that day. Tongs and I took every bit of an hour to do our morning routine (which usually takes 20-25 mins tops) But eventually it was time to hit the road, only after a quick chain lubrication session. Because this North East California Wander was just about to really begin, I had no flipping clue where we were going. Other than a general direction of Northeast… I plotted some random points on some random roads that looked good and off we went!

We took a right out of the campground and straight onto a National Forest dirt road!! Tongs: “Nooooooo! It’s too early for this!”
The Hack: “Don’t worry, before you know it, we’ll be back on pavement!” We didn’t make it back onto pavement for a long while.

Every now and again, Tongs would believe that we had made it out from the NF sandy roads of doom.
But then we would be right back onto NF roads.
Dingle’dangles! The “roads” kept getting worse and worse! By 10:45am we were riding unmaintained, rarely traveled, two track with rocks and grass in the middle.
Tongs was not stoked, not stoked at all. The Anakee 3’s on our Wee’s were proving to be excellent all-around tires thus far, both Tongs and I were really stoked on these tires. Excellent street grip, decent dirt grip, a true 90/10 tire, 6% better in the dirt than a Bridgestone T30 Evo in the dirt!

We eventually stopped to get a nip of refreshment and take in the beautiful nature. 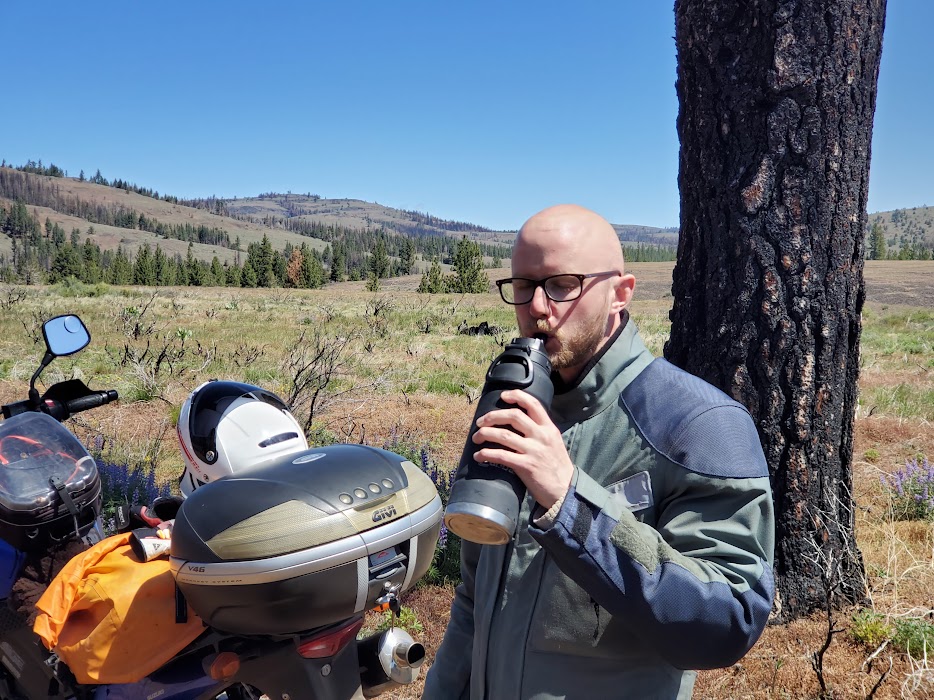 Tongs stopped to check in on his Wee. He likes to get deep up in the guts while examining his Wee. Finally, after about 50 or so miles of early morning dirt adventuring, Tongs and I popped out near Antelope Reservoir. There wasn’t a soul around, it was very surreal. The pair of us rode around the lake to take in all the views (or maybe I took us around the lake by mistake?) Eventually I got us righted and pointed down Diamond Mountain Rd towards Taylorsville.
Pavement, Tongs was pleased. We had a fantastic ride from Taylorsville to Susanville, where I let Tongs find us a place to fill our bellies with food. Tongs located a nice little joint called the Courthouse Cafe. Tongs likely chose this location based on the reviews that stated, “large portions.” Tongs and I love large portions, large portions fuel us. Large portions are a near requirements since we are often sequestered to one meal a day, due to my stupidity. It was also 2:30pm and Tongs was clearly thinking with his stomach. It was so much food that neither of us could finish it. I very nearly ate 3 biscuits and gravy, eggs, hash browns and bacon… During the consumption process I had to loosen my back brace (foodbaby-girdle) twice. I was afraid that I wouldn’t be able to synch it back down if I finished all teh gravy, that or I was going to puke.

Tongs too left some food un-eaten on his plate. That’s how you know it was a lot of food.

The two of us waddled out of the Courthouse Cafe, barely able to walk, let alone talk.
But before we knew it, back into the dirt we went! 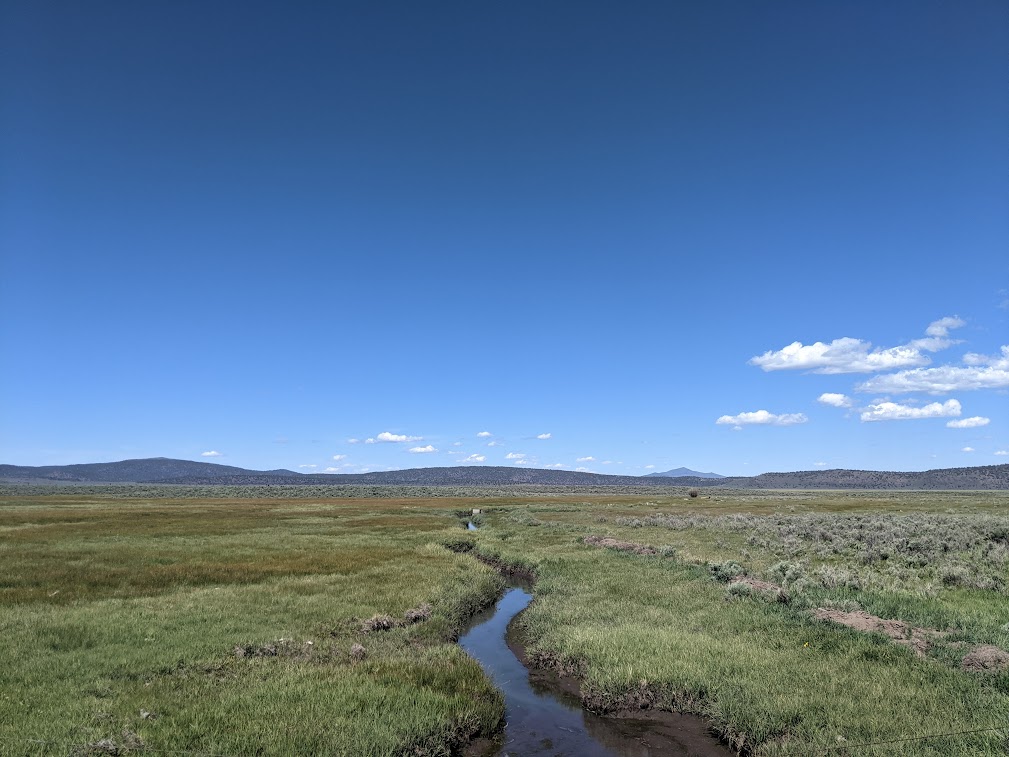 I thought it would be a killer idea to go ride around Eagle Lake and up towards Goose Lake.
Welp. After a short section of pavement, we were balls deep in another 50+ mile dirt detour. 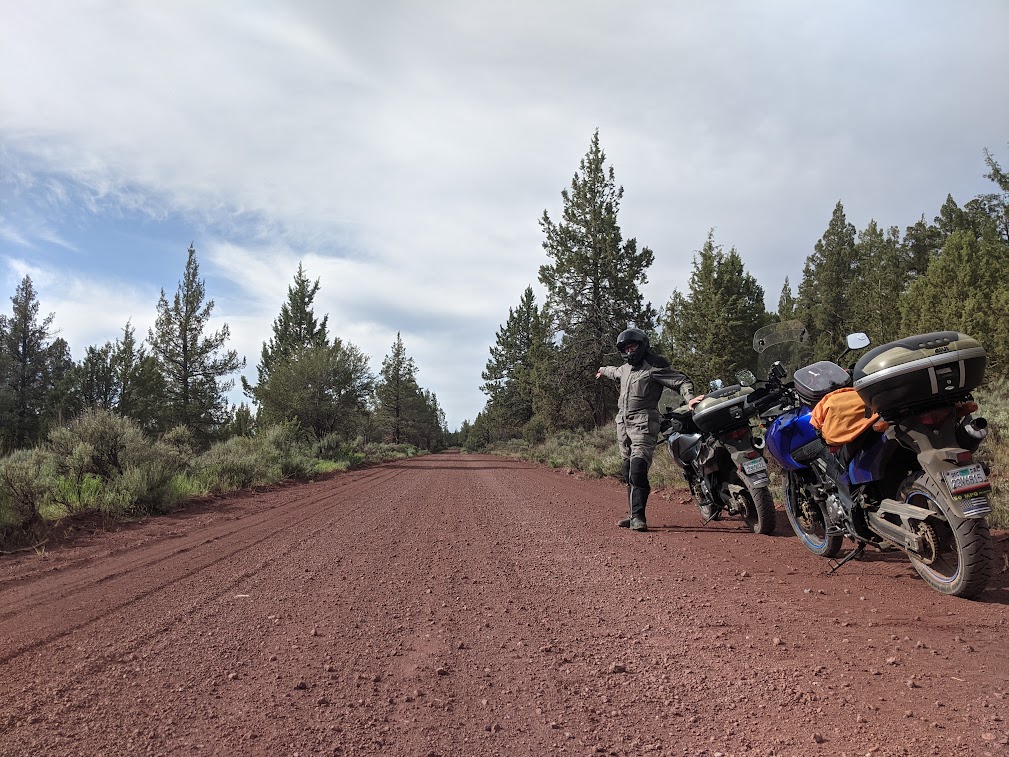 After about an hour of doing 50mph+ on lava rock NF roads, I watched Tongs crest a little rise in the road and scream at the top of his lungs

Then the Cardo (bike 2 bike intercoms) cut out and I saw a huge cloud of dust.
Ruh roh Raggy!

A few heart thumps later, I saw Tongs blasting down the road, phew. He made it!
But where was the cow?!

As I crested the rise, I saw a small baby calf on the right hand shoulder. The little bugger did a 180 hop-skip and began running on a collision course towards me and my Wee.
WTF!

The little calf ended up somehow getting in front of my bike as I was still doing easily north of 30mph… the rear left hoof of the calf hit my front wheel and sent me into a short mini-tank slapper. Good thing I have a Scotts steering damper!
I hollered good and long, stupid baby cow!

Tongs and I stopped for a few pics along the way, it was a really splendid afternoon ride. Tongs was finally getting in his dirt groove, as he was blasting way off into the sunset, coating me in a thicc cloud of dust.
Fucker. 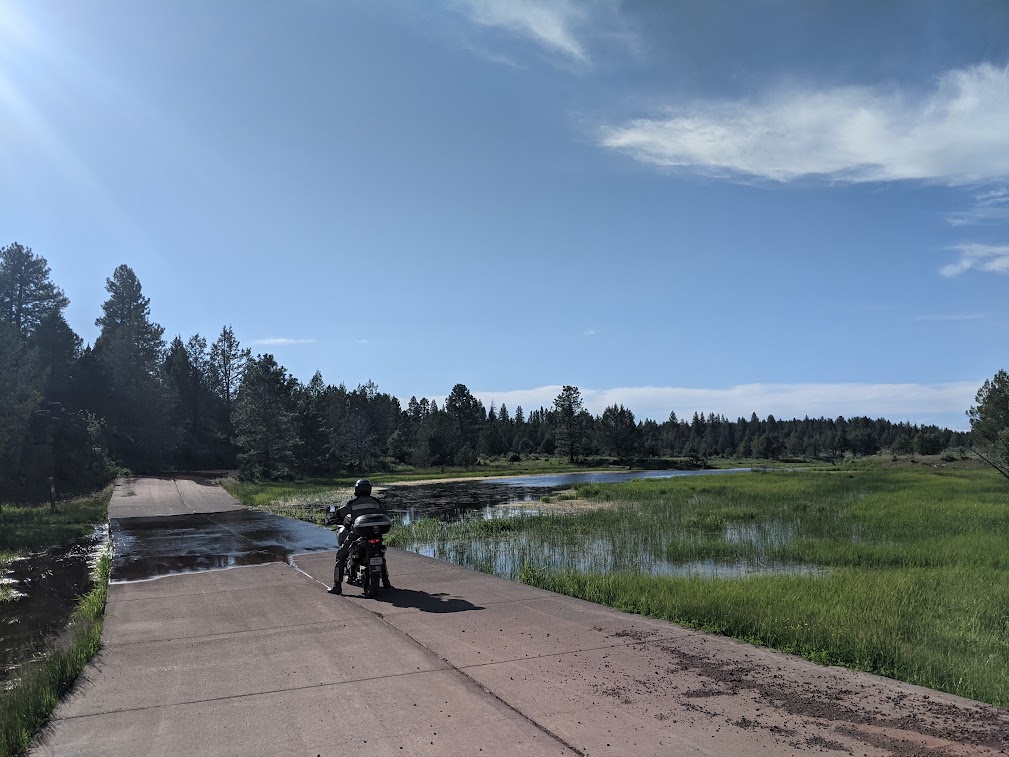 We ended up making it to Lakeview for some gas and right back on the road, but it was close, less than 20 miles till empty.
It was getting late and we wanted to make it up to Summer Lake Hot Springs just north. A friend of ours recommended the place for a nice soak after a long day of hoon’n.

It was a relatively boring ride up to the hot spring, but the views out on the dry lakebed were amazing. Since we didn’t get anything to eat in Lakeview… It was time for dinner!

Can’t ride all day if you stop to eat three meals a day! 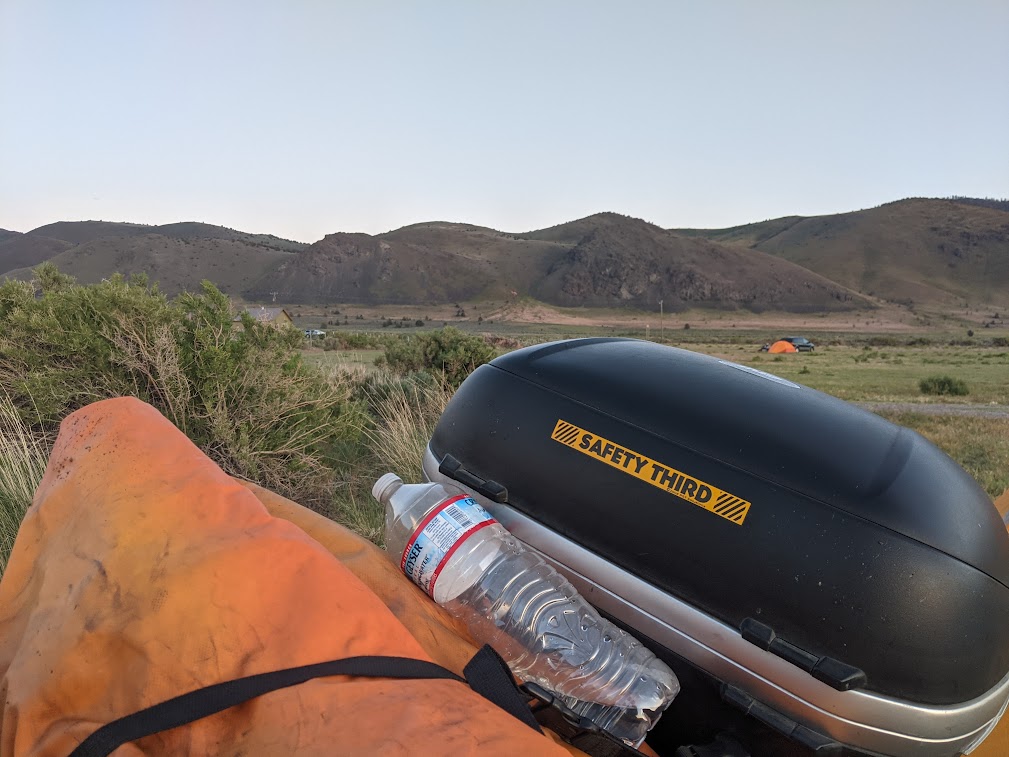