People often ask me about all sorts of stuff regarding the RV…here’s a list of things that I’ve found to be pretty much ESSENTIAL to our way of life and happiness while on the road.

FYI, all of these links are to Amazon, where I purchased everything. I earn a small commission if you use my links and order either these products or anything else from Amazon within 2 days or so after clicking through my links. Plus, Amazon just has really good deals on stuff and I spent MANY MANY HOURS scouring/researching for these products that I use. So if you buy using these links, you’ll be helping us out with gas money! Thanks!

* I pulled out the old TVs and put in inexpensive smart LED tv’s that use FAR less power – 43″ Samsung LED TV and a 24 inch in the bedroom.
* We listen to a LOT of music and watch movies…good sound is a must have and we do not regret buying this one bit – Samsung HW-Q60R Harman Kardon 5.1 Soundbar with Wireless Subwoofer

* We only have 33 gallons of fresh water, we gotta make every drop count – Oxygenics Fury Hand Held Sprayer
* Because of our small fresh water tank, I carry two of these in the trailer as well…it’s enough water to get us through in a pinch! – Reliance Products Desert Patrol 3 Gallon Rigid Water Container
* Pressure accumulator so my water pump cycles less and uses less power and lives longer – SHURFLO Black 182-200 Accumulator Tank
* Hybrid Electric Water Heater so I don’t burn up tons of propane for hot water when I’m plugged into power – Camco Hot Water Hybrid Heat Kit

* When parked in neighborhoods or anything, wifi can be hard…this gives me the ability to connect to wifi much further away and have my own network onboard – ALFA Network WiFi CampPro 2 Universal WiFi
* I SWEAR these are the best trailer tires, even rated for 81mph! – Carlisle Radial Trail HD Trailer Tire
* Super sweet folding rocking chair. Seriously – GCI Outdoor Freestyle Rocker Portable Folding Rocking Chair
* My dash cam runs 24/7 and gives me MUCH peace of mind – Transcend DrivePro 230 Dash Camera
* I’ve had to change tires in the dark and this is a great cheap worklight. Rechargable too! – STANLEY Rechargeable 1200 Lumen Lith-Ion LED Spotlight
* If you have the room to carry one, I’ve found this to be one of the best things; I buy gas at a cheap station and fill up later with it. – DuraMax Flo n’ Go 14-Gallon Rolling Gas Can

That about sums up the things I’ve found to be the most important! Thanks for reading and I hope these links help!

Here’s my wishlist of things that I really want for future upgrades as well: 4theriders Amazon Wish List 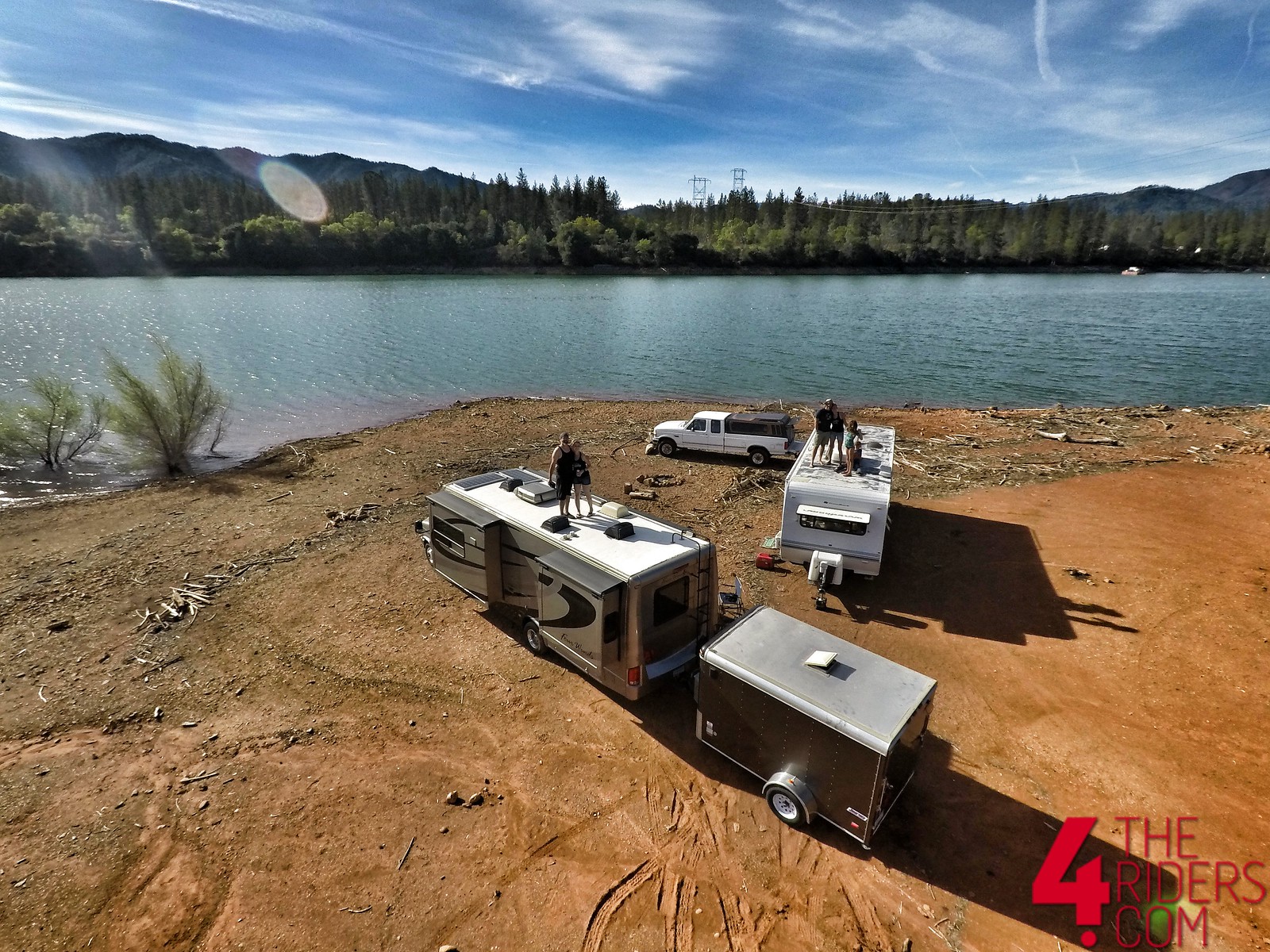 So, I’ve had a number of people ask me about my solar setup on the RV. Frankly, it’s not all that extravagant, but it’s probably the single best modification I’ve done to my RV so far. Not just bang-for-the-buck, but all out best thing I think anyone can do for their RV.

I had purchased 6v batteries for the RV, but I didn’t want to waste the two 12v batteries that the coach came with. They’re only 80ah batteries each, but they were brand new when we got the RV…and I’m a waste-not, want-not kinda guy…so I’ve still got the 12v batteries in there, nearly a year later.

Brianna and I spend most of our time off-grid and not plugged into power. In the last 9 months that we’ve had solar, we’ve put approximately 50 hours on the generator. 10 or 11 of those hours were over a 2 day span mid summer when we wanted AC and had no access to shore power.

We do normal things while on battery. We have lights on at night, listen to music ALL the time on the surround sound system, or we’ll watch movies and such. We run the blender for smoothies. We have vent fans and a stand alone 12v fan. You know, normal stuff.

I installed energy efficient EVERYTHING into the RV. The lights are all LED. Even both smart TVs are LED. One is even 40″…So we’ve got that going for us. I check the voltage very regularly, as I’m pretty OCD about stuff being charged…we usually end a night sitting right around 12 to 12.2 volts. We usually wake up to 14 to 14.3 volts.

Solar. Solar was the best thing we’ve done to the coach so far.

I spent $339 on a kit from Renology on Amazon. It had two 100 watt solar panels, the mounting hardware, screws, all the connectors and 10AWG wiring necessary, and a 30amp PWM solar controller.

END_OF_DOCUMENT_TOKEN_TO_BE_REPLACED

It’s been a while since I’ve posted. A lot of things have changed, including having bought an RV. :) I’ll be making posts about RV life on here now too. I hope you don’t mind! :D